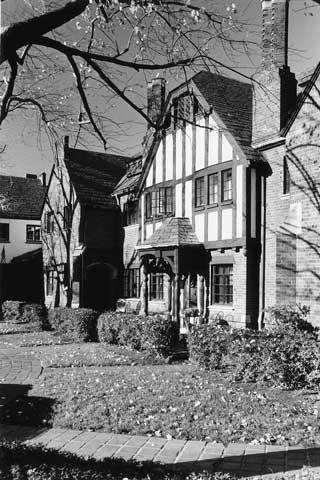 English Village was an imaginative plan for multi-family residences, similar to the type being built in California, yet unique for Richmond. Designed to be viewed from the street, the Village presents to the passer-by a glimpse of a picturesque assemblage of Tudor country cottages surrounding a courtyard with their lively massing of brick and half-timbered,gables, buthressing, and tall ornaental chimneystacks. Yet the Village was built in a contemporary planfor modern living~withthe latest conveniences and with the latest building technologies. Traditional in style, but unique'intype for Richmond, English Village was a refreshing departure from the usual multi-family residences being constructed at that time. While three-or-more story apartment complexes mushroomed on Monument Avenue and traditional rowhouses lined the streets of the new suburbs, Rowlett designed a grouping of low Tudor styled buildings around a central courtyard set back from the street. The hctional U-plan provided each family with access to both communal and private recreational space. The lateral plan integrated the buildings with the land- scaping. The total effect was that of English country houses in a garden setting.

Designed for economy, efficiency, and permanency of building materials without sacri- ficing aesthetics, the Villas is composed of seventeen attached uits two-and-a-half stories high built of brick walls, a distinctive water table, buttressing, prominent gables, and half-timbering in some of the second-story mbles. The overall appearance is that, of asymmetry yet the plan is symmetrical with each half being the mirror image of the other. The plan consists of a symmetrical main block and two wings extended forward at each end of the rectangular main block. The wing; are asymmetrical but mirror images of each other. The off-centered doorways are capped with 'Pudor-arched lintels made of castooncreteembellishedwithdesignsof lion^ heads,coatsofasms,grapevines,and the diaper motif. Some of the door surrounds are quoinwork of cast cement mmde to look like stone. The Arts and Crafts philosophy is apparent in the treatment of the doorways. The doors are board-and-batten with stained-glass ~rindowsand wrought-iron strap hinges and thunb latch door handles and knockers. Fenestration on the first and second floors consists of a variety of window shapes and sizes; round-headed windows with leaded stain- ed glass, small narrow rectangular leaded stained-glasswindows with label moldings of cast concrete, and metal casement windows set in groups of two's and three's. The cor- nice in the second story is small and molded. The lines of the gray slate-covered hipped roof are broken by shed dormers, stepped gables, gable ends, some of which have jerkin heads, and large decorative chimneystacks.

The focal point of the building is the main block which faces the central courtyard. The horizontal lines of the main block are interrupted by the vertical lines of the prominent central gable with second-story half-timbering and the vertical thrusting of the chimneystacks flanking either side of the gable end. The one-bay entrance porch again reflects the Arts and Crafts era with its heavily turned wooden posts with brackets and carved acorns and slate roof. Fixcept for this rather ornate porch, Rowlett gas some~rhat restrained in the use of ornamentation, but rather used quality materials for color and texture. The brickwork is laid in Flemish bond with a tapestry-like pattern in the gable peaks. Cast-cement recessed panels with molded coat of arms designs are also located in the top of the gables. The gutters and downspouts are made of copper. Other uses of ornamentation include a distinctive brick beveled water table which serves, visually, to tie the units together, and brick corbelling under the eaves on the gable ends.

The south, east, and west elevations fronting Grove Avenue present the formal side of the Villas, while the north, east,and west elevations facing the rear alley are more utilitarian and resemble the typical rear elevations of rowhouses in Richmond. The plain rectangular common brick walls of the first and second stories are laid in common bond. Simple hoods with brackets shelter the rear doorways. Fenestration consists of 6/6 lights with double-hung sash. Each dwelling has its own private tiny rear patio or garden area enclosed by a picket fence. "Modern refrigeration" boxes are still conveniently located near the back kitchen doors. The furnace room and four-room apartment for the custodian is located on the northwest corner on the rear of the building facing the alley. Seventeen attached brick garages with metal shed roofs are located on the north side of the con- crete paved alley.

The interior plan which varies slightly for each unit was designed for comfort, convenience, and efficiency and for a servantless lifestyle. One enters through an inte- rior vestibule dimly lit by stained-glass windows. Tudor arched doorways lead from the living room to the dining room to a compact galley-type kitchen at the rear. An open stairway on one side of the living room leads to three bedrooms and a porcelain tiled bathroom upstairs. Some living rooms are equipped with corner fireplaces with cast- cement Edor styled mantels and terra cotta tiled hearths. The original mantek were left unpainted to resemble carved stone, however, most of the mantels have been painted over. The ceilings are low with coved ceilings in the hallways, living rooms and dining rooms. Party walls are constructed of cinderblock with a stucco finish. The walls were originally painted a cream. The woodwork, including the two-panelled doors with glass door handles, door and window trim, stairway nevel post, handrail and turned balusters, was originally stained a dark oak. The creamy walls and the lighter red oak floors were meant to ccn-Lrast wi-th the darker tones of the doors, windows,and trim. Number 3418 Grove Avenue still retains its original finishes, while most of the woodwork in the other dwellings has been painted over.

English Village contained a l l the latest and most modern conveniences according to Davis Brothers' advertisements, including a concealed stairway leading to an attic for storage purposes, Copeland dependable refrigeration, and parked entranceways. The newspaper cited the Village as "Richmond's most modern building achievement." The construction cost was estimated to be $200,000. The centralized heating and hot water system was a fairly new concept. The original boiler system was coal-fired with three separate mains leading from the boiler to the three wings. The hot water had a 120-gallon capacity, hardly enough by today's standards. The system was installed by Gregory and Graham, Inc. In 1946, the domestic hot water system was replaced. Since then, the centralized heating system has also been modernized.

The original landscaping plan consisted of fir, spruce, elm, and hemlock trees combined with ornamental shrubs and lined with terra cotta patios and walkways. A water fountain graced the central courtyard. The circular drive was paved with brick. A play- grouad was located in the northeast corner of the lot behind the buildings. Brick walls enclosed the grounds with a gateway leading to the driveway. In 1947, the original landscaping plan was altered by Charles Gilette, a Richmond landscape architect. The fountain was removed and replaced by the present flagpole. The driveway was paved with asphalt and the playground no longer exists.

Because of the quality of the building materials used and careful maintenance, English Village is in excellent condition. English Village has also retained its architectural integrity as a result of a restrictive covenant in the corporation by-laws which restricts homeowners from altering the exterior of their individual homes. Desipped for efficiency, economy and aesthetics, English Village, over fifty years old, continues to meet the needs of today's lifestyles and to lend its unique charm to the Grove Avenue neighborhood.

Source: English Village on the National Register of Historic Places